skip to main | skip to sidebar

Wow, after a long stretch of packing and unpacking, we're finally getting settled in to our new house. That's why you haven't heard from me in awhile. It's been stressful to say the least. It's all worth it though because we're in a much larger home in a place that just feel comfey. The neighbors are friendly and Victor is closer to work. The furry kids have more windows to look out of and they are anxiously awaiting birds that we've tried to lure here with bird suet. So far the birds still have not found our food and I'm wondering why. I guess soon enough they will be eating us out of house and home.

Speaking of home, I've recently added a new line to my glass items. You saw the larger house here first and now I'm introducing the mini houses. The first one is on Etsy now 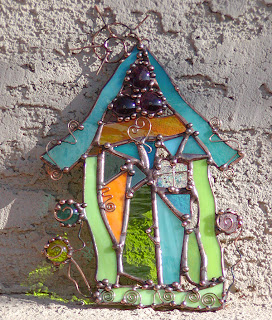 What color are you

What Color Crayon Are You?
Posted by Dianne at 7:38 AM 2 comments: 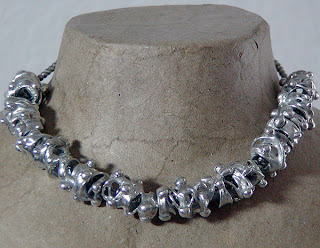 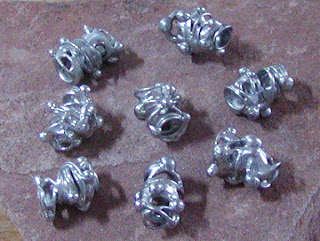 Well, here is the latest and greatest of what I have been making. I will be starting the big order soon of 100 stars for wedding favors but in the meantime I came up with these. They are little metal beads and I've listed them on Etsy. I love how they all look when they are clustered together. I'm not sure where I got the inspiration from but wherever it came from, a little voice told me to make them. Now if the men in the little white coats hear about this, I might be taken away.

I'm trying something new here, a mosaic, and this is the prototype for future projects. The only thing is, I don't know what color grout to use. In case the photo is not reflecting the correct colors, the primary flowers are in the orange, blue and pink tones and everything in the background is white, and a light pale beige and a baby baby almost white baby blue. The squares are the baby blue, the brick like background is the white and the triangles are the creamy beige. So do I use a black grout? I would like the flowers to pop a bit more and some of the leaves don't stand out enough for me right now so I'm thinking a darker color. I'm not thinking I want blue grout so do I go grey or black???
Posted by Dianne at 5:48 AM 6 comments:

I'm still trying to figure out how to put my words around the pictures but below all these pictures is more of what I said. 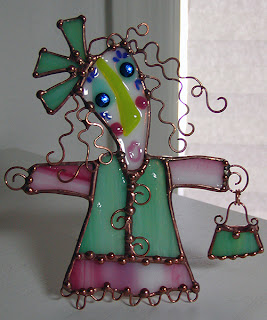 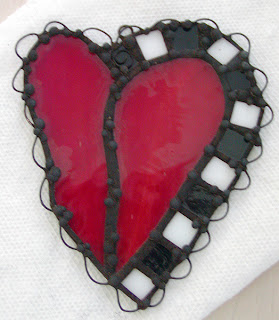 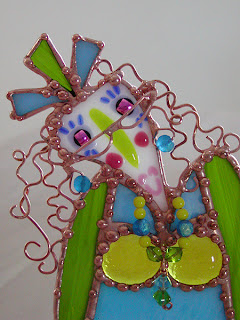 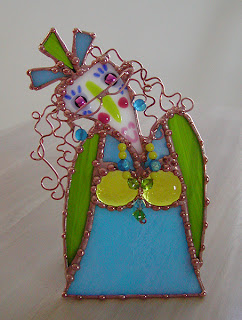 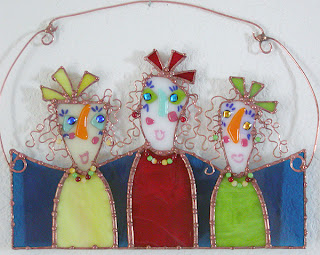 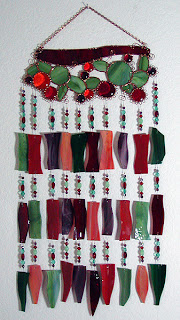 Wow, I've been really busy lately. I just finished some special orders. One was this wind chime that turned out absolutely gorgeous. It sounds even better.

Plus I've been making some of my girls for a new friend. She saw Louise on a previous post on my blog and fell in love with her. Since I won't part with the original, she asked me to make a special one just for her. I named her Doris and I think she is just as fabulous. Then I made another trio Girlfriends and a couple new night lights. Also the heart pictured is almost done. I just have to buff it up and add some beads that it strings from 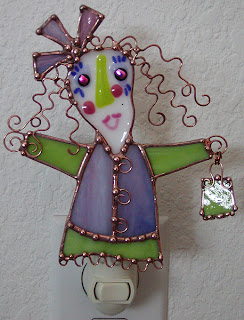 I know it's been like a trazillion days since I've posted to my blog. Well, it's been a little nuts here to say the least. My in-laws were here for a month and during that time we did a Hollywood Vacation. We saw the pilot for the new Action News show that has Kelsey Grammer and Patricia Heaton in it. You dont' want to miss this new show as it's hilarious. We also saw Steve Carell and his wife at the zoo. We drove next to Pat Boone and saw a movie red carpet event in front of the Kodak theatre. Lots of fun.

Then when the in-laws left, we followed them 2 days later back to Jersey to surprise them for their 50th wedding anniversary.

After we got back from that our cat, Monroe, below, was constipated. After 3 days in a week at the vet, several enemas and a giant colonic under anestesia, he is finally doing much better. He will be on meds now for the rest of his life, but he's taking it all like a real trooper. 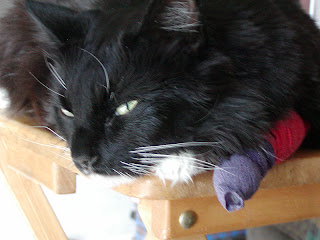 Things are pretty much back to normal now and I've got some new listings on ebay. The girl night light above is what is listed on ebay now. I've got to figure out one of these days how to get the picture in the post where I want it. Anyway, Just thought I'd check in for now. Have a good one.

Posted by Dianne at 4:36 PM No comments:

A Trio of Girls

Ok, I didn't post the picture of the brunette and the blond individually, but here is a picture of the three of them together. This might be the last time I get to paint for awhile as my in-laws will be here in less than a week and staying with us for 4 weeks. I usually paint and cut my glass on my kitchen table so will have to keep it cleaned off to actually eat dinner on. I know, what a concept, right?

Posted by Dianne at 4:20 PM No comments:

Dianne
Originally from Michigan, I now reside in Phoenix with my husband Victor and 2 furry kids, Monroe and Jazz, long haired tuxedo cats. I've been a glass artist since 1985 and love creating original mixed media art.

Here's what I've said in the past